Leading Lines | How To Use Them For Bulletproof Compositions
December 19, 2020

Human eyes are naturally attracted to lines. That is just how our mind works.

Lines of any kind. Straight lines, curved ones, even imaginary lines which only exist in their implication (I will explain this).

In this post, we would decode how these lines evoke certain specific emotions and how we could leverage them to construct better, stronger images.

Let’s start then, shall we?

It’s all in the name, “Leading Lines”. These are nothing but actual or imaginary lines that run along with the image and ‘lead’ our eyes. The big idea here is to first quickly attract the attention of the viewer toward the said line and then use it to guide the viewer’s eyes. In other words, chalk up a path through the image for the viewer to follow.

Why Would You Want This?

No matter what type of image you make, you always want it to be easy to comprehend and fast to express. It should be able to on its own make the viewer stand and take notice. Buy enough time to deliver its essence.

Leading lines is just one way to streamline the process.

Think of it like a flight of stairs that you offer to your viewer to go from one part of the image to the other. Sure they could have managed without it (the stairs) to get on to the 2nd floor anyway but that would have required a lot more effort and time. Wouldn’t you agree? 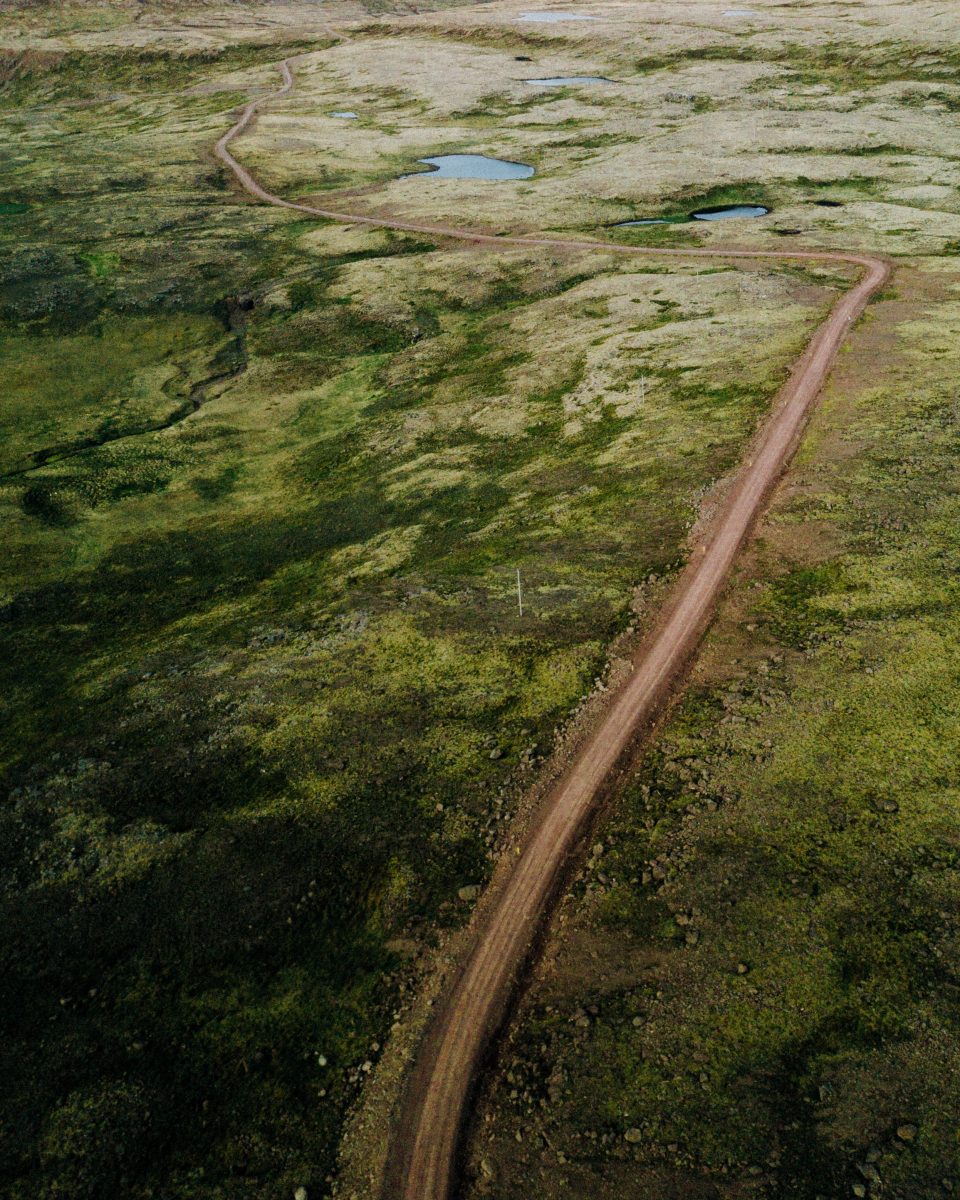 Did you notice the image above?

Now rewind 3seconds of your life and try to remember what was the first thing you noticed in the image. Once you figured that out, try and recall how your eyes traveled across it.

Look I had no way of cheating and knowing your answer beforehand. But I am willing to wager that the first thing you noticed about the image was the trail going through it. Particularly the bottom part of the image. And once your eyes were riveted to it you followed it through to the top of the image.

Does it match up? I think it does.

This is the magic of leading lines. It has this beautiful intrinsic quality of attracting attention and then keeping it long enough to go around the image.

Imagine if you could wield this power as a photographer, you could practically draw invisible traffic routes through your image which would make looking at your images quite an experience.

Now that we are aware of the captivating power of leading lines in images, let’s go ahead and categorize all their shapes and forms. This would help enormously in controlling the exact essence and feelings our images evoke.

Let’s get going then.

This is probably the most used leading line anyhow. Even if you have never thought about it, you have been using this for a majority of your nature and landscape images. 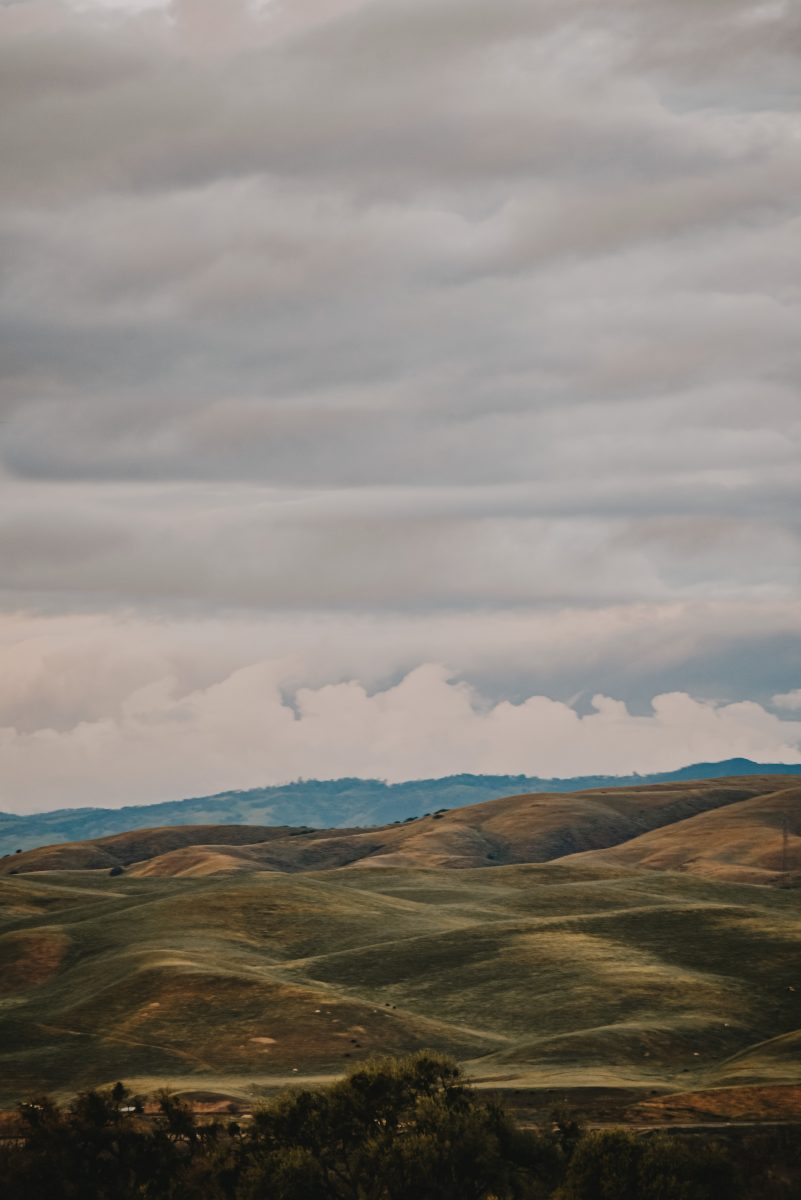 Horizontal leading lines create a sense of calm and composure in the image. It divides the images into two very neat halves (top and bottom) and evokes a quiet sense of harmony between them.

In contrast to horizontal lines, vertical lines provoke a sense of power, strength, and stability. It makes the image look far more direct and confrontational.

It is hence best used for images that have a strong intrinsic message or a subject that projects a strong perspective.

Many photojournalists who cover political and socioeconomic issues use vertical leading lines very often to tell a more compelling story. You can go through this post for some stunning examples: James Nachtwey | American Photojournalist, War Photographer.

Diagonal lines elicit a sense of motion, a journey, a change from one thing to another.

This is however gross generalization. Horizontal leading lines do have such effects on certain images but how they make you feel is very much influenced by the subject matter of the images itself and how they are composed in the image.

These lines generally entice the eyes of the viewer to follow it all throughout the image and in the process touch upon a few important, yet unrelated elements. 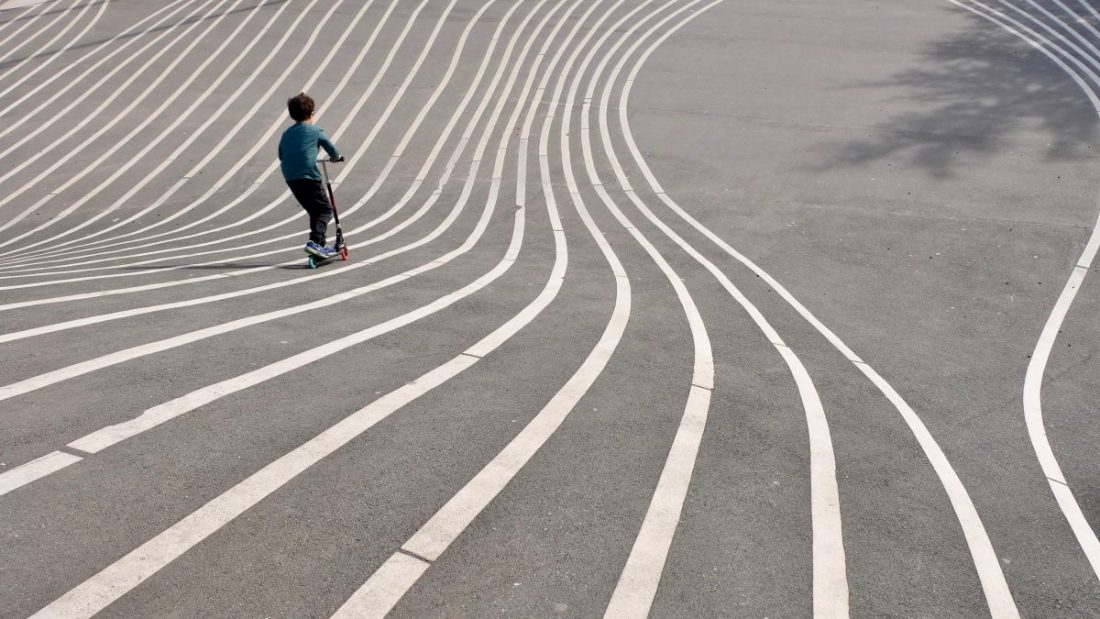 This one you have seen a thousand times. Two leading lines intersecting (almost) at a point. 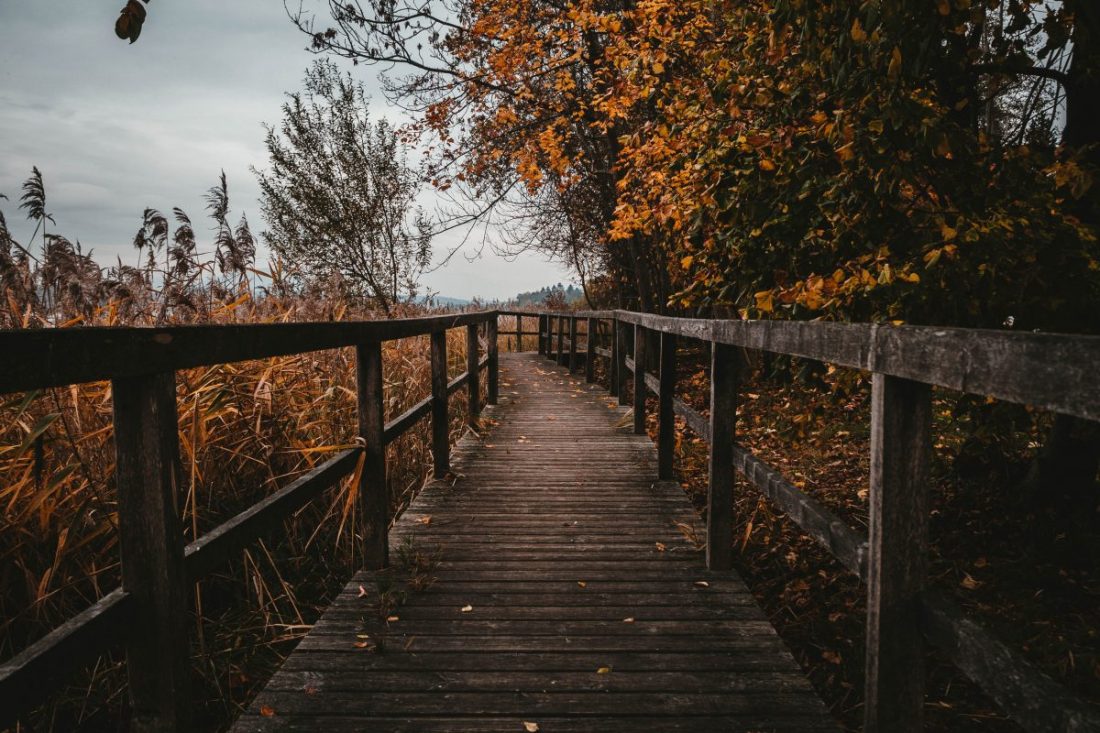 In this one, our eyes start where both lines originate and follow them to the point of intersection. It has a sense of enigma and mystery about it. What comes after this…if you would.

As the name suggests, these lines are actually not physically present in the image itself. They are merely strongly hinted at.

A very easy example of an implied leading line is a person looking towards a certain direction in the image. 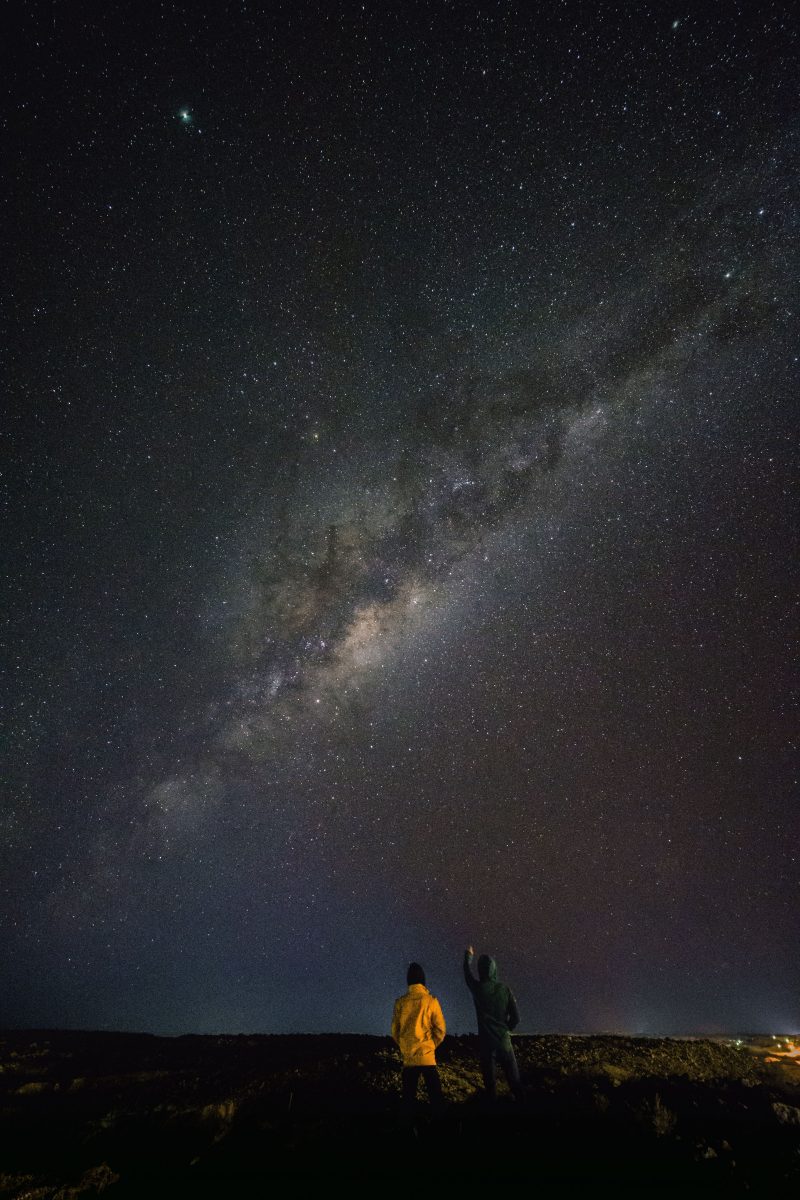 We, humans, have a natural tendency to look in the same direction someone else is already looking towards to know what they are looking at. Curious us!

An implied leading line just utilizes this key human behavior and banks on it to direct attention to some pivotal element of the image.

This definition is quite elastic in nature and could be applied to myriad situations. Someone pointing towards a direction or maybe the general flow of the elements in a certain fashion that naturally shepherds the eyes in a particular direction, etc.

Okay, now that we have the basic constructs of a leading line internalized, let us start charting a plan about how we could actually go about using it in an image.

The first job is to obliviously locate a leading line in your composition. Fair warning, this is easier said than done.

Finding a worthwhile subject and composing it nicely within the confines of a frame is a hard enough job. Now to introduce another new element in the mix and try to thread that through the rest could be challenging.

If you feel too overwhelmed, stop whatever you are doing and take a minute.

Start with something small and easy to master. Try shooting landscapes. Say something like the image I showed you above of the narrow path going through the green field.

Since nearly everything is static in a landscape you have all the time in the world to take as many images as you want. Look at them on your camera LCD, analyze them, and try and make a better shot.

Always remember, the idea is to capture the attention of the viewer quickly and then hold it long enough to lead his/her eyes through the images along the line. Think of the leading lines like connections between two parts of the same image.

Two simple things that you could do to try and use an existing line as a leading line are:

All things remaining the same. Sometimes just taking the same shot from a little left or right may position the lines in your image just right. I know this seems very obvious but it is very often that we dismiss genuine opportunities before we try and find a way to make it work.

Finding a leading line in an image is not very hard. What is hard is making it work with the rest of the composition you have in mind. Your job as the photographer is to find the lines that fit and use them the best you can.

Whenever in doubt ask yourself the question “how is the attention of the viewer directed?”

When NOT To Use Leading Lines

The basic reason for using leading lines is to keep and direct attention. So it goes without saying that when the lines in the image do not fulfill these requirements we need to readjust the composition.

Here are some common scenarios where you might want to lose the lines.

The sole objective of ANY image is to call attention to the primary subject of the image. Every other element in the image is just there to support this overarching cause.

So it stands to reason that when a ‘line’ in the image diverts the attention away from the principal subject, it should be removed. 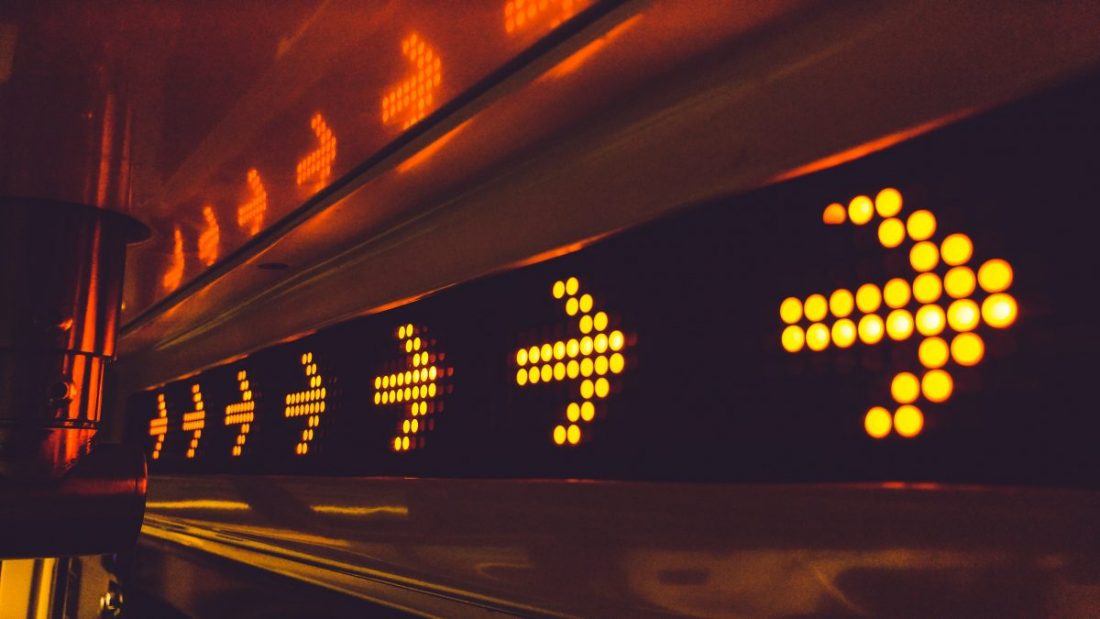 Any line you incorporate within the image should draw attention to the subject, not take away from it. In other words not any line will do. Lines that are in harmony with the rest of the elements and works for the common purpose of showcasing the central subject are only to be used.

Refrain from using leading lines that reroute the viewer’s eyes out of the frame, or skip the main subject, or serves no particular purpose at all.

My intention with any image I take is very simple. Tell a story. As cleanly and quickly as possible.

The cleanliness part really helps with the speed with which I am able to communicate with the viewer through the image. Crisper and unhindered the image, easier it is to convey.

In just the same way, too many leading lines, fragmenting the already scant attention of the viewer into multiples elements of the image at the same time may do more harm than good.

So the easy way to avoid this is to just use a few lines per image if you find them to be helping the composition. You do not want to create an overburdened and chaotic atmosphere that actually leads nowhere.

If the concept of leading lines is new to you and you now see the value in using it in your own images, give it the time to stick. It would take some time for you to notice, filter, and employ the best lines for your photographs.

No matter what you do, do not deviate attention from the central subject of the image.

Try and previsualize how you want the final image to look like and then use the corresponding type of leading line if available. We just discussed the basic emotions that certain lines evoke within the frame. Depending on the use and the presence of certain elements the lines could evoke a completely different response than expected. This is where you need to use your creative muscles to conjure up the magic of photography.

If you decide to use a certain line, make sure that the lines are clearly visible and in focus. The viewer shouldn’t be expected to look for one. It should be readily visible.

That is it, folks. That is all you need to know about leading lines and how to use them the best.

If you have any more questions please post them down below and I will be happy to answer them for you.