How To Photograph Rainbows | A Complete Beginner’s Guide
October 19, 2018

Rainbows are an absolutely beautiful way to pump a little color into your images and give it the oomph it needs….literally. Agreed that it may not be a very good stand-alone subject but it really can act as a fascinating catalyst which can radically transform an otherwise mundane image into something magical.

You have to be on your toes and raring to go though. Even to have a chance of capturing a half decent rainbow (unless you are extremely lucky). They are indeed very finicky and appear and disappear very quickly.

There are few tell-tale signs to look for. A few clues so as to let you know where they might potentially appear and from where it would look the best.

So let’s get on with it, shall we?

Rainbows are optical illusions. Yeah, I don’t like the sound of it either but it is unfortunately true.

They are caused when a shaft of white light (which contains light of all colors) passes through water/moisture. En route to passing through the moisture, the white light breaks up into many colors due to a phenomenon called refraction. It is because of the same reason, sometimes soap bubbles have that characteristic color spectrum on it.

Now to have a rainbow actually take shape, a lot has to happen in sequence backstage. There needs to be sufficient amount of moisture in the air, the light has to be just intense enough without being overpowering. Even the position of the light source matters for the light has to hit the moisture-laden air at a specific angle to make a prominent and well-defined rainbow.

We have the Sun as the light source. The water/moisture source could be many though. Rain drenched air is the most common but we can also have rainbows created out of waterfalls, sprays, natural geysers, even fountains. Basically, anything that can potentially cause a substantial amount of air to get ‘wet’.

The most well-formed and prominent rainbows are created when the sun is pretty low on the horizon (morning or evening). This causes the light to hit the air from a lower angle causing a larger and higher rainbow to form. Just to be clear you can also have rainbows at noon but those would be much smaller in size and lower to the ground since the light source is directly above.

Since the rainbows are generally so faint, a dark background always helps it to stand out in contrast. The ideal condition is to have the sky covered with dark clouds with just a slight opening where the sun is at. This will allow shafts of light to be created which are optimum for creating the magical color spectrum.

If you have the above setup ready (not that you have any control over it), keep your eyes peeled because the rainbow may appear any moment now. If you are out rainbow hunting, you need to be able to successfully find the clues and be prepared to shoot when it peaks.

The rainbows are always formed on the opposite side of the sky from where the sun is. If you happen to find one which looks too faint, try and change your position quickly and see if it makes a difference. Many rainbows initially look very feeble at first but grow in intensity with time.

This part is easy.

Keep the ISO at the minimum (ISO 100 for most cameras). Since you already have a tripod, you do not need to care much about the shutter speed.

For the aperture, choose one between f/8 and f/11. It should provide for a sufficient depth of field to cover the rainbow and the landscape.

One important thing to keep in mind here is the light metering. Since the sky would be partially covered with clouds with an occasional break in them, there would be very bright and dark portions in the same scene (high dynamic range). To avoid losing any details make sure that you meter the dark parts and not the brighter areas. Even if it means underexposing the image a little. Keep a close eye on the image histogram to be absolutely sure. If anything, keep to the left than to the right.

Shoot in RAW format. It would be your best bet and provide you an ample wriggle room later in post. For any more insurance, should you need it, you can also bracket your shots. Three shots at an increment of a stop should be enough.

Yes, rainbows do look grand and pompous but in conjunction with the rest of the image. An image with just the rainbow wouldn’t look too good in my opinion.

So basically you need a composition which would complement the rainbow well and vice versa. Try and use the rainbow to add that little extra to the image. An image with bad composition cannot be rescued with just an addition of a rainbow. 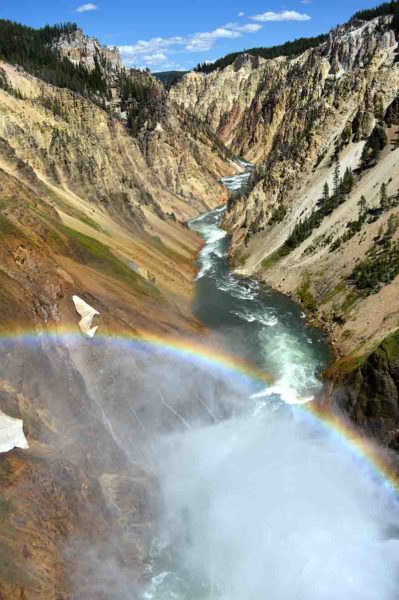 Like all good images, in this too you would need a good foreground and background element(s) to make the image look beautiful and well balanced. Look around the scene and select them judiciously.

A dark background would help in bringing out the best colors of the rainbow. You can use a tree, a person or even a small house for your foreground. Anything that, according to you, bodes well with the rest of the scene. Sometimes even going a little low may help. A rain-drenched country road or a small shrub with moist leaves may lend itself pretty well to the image. 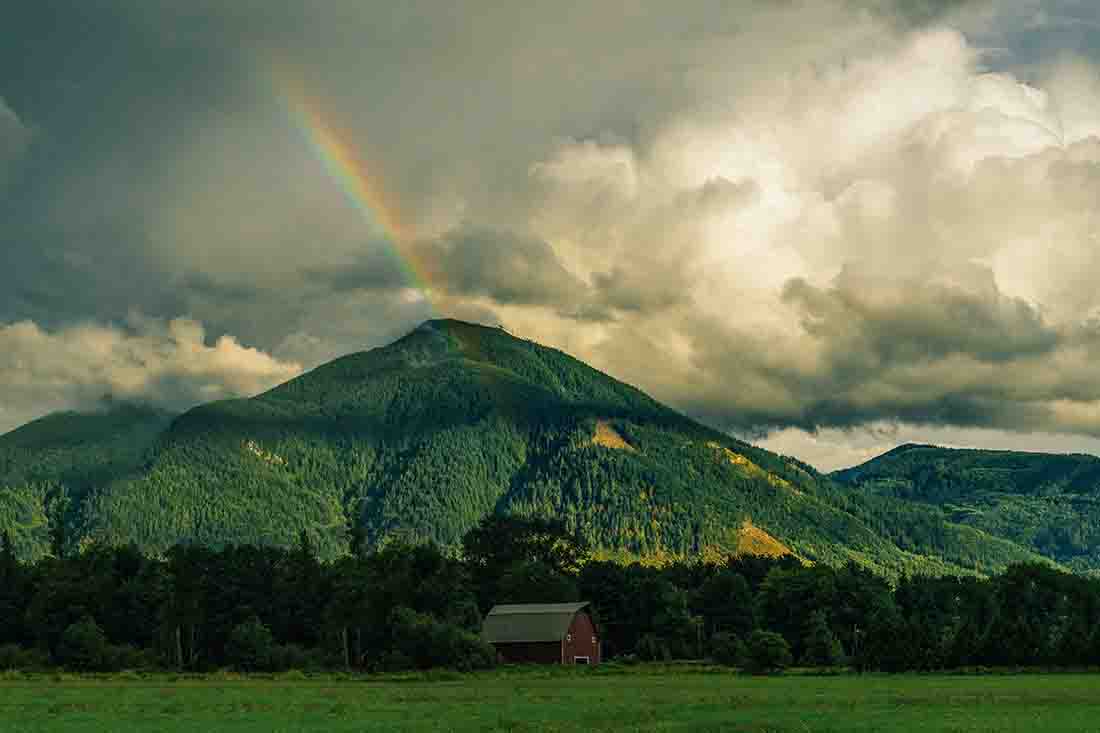 One easy tip to make your pictures look good is to use the ends of the rainbow properly. Depending on whether you can see only one end or both, you can change your composition. Since the rainbow is an illusion, you moving away or towards it will NOT make much of a difference. What you can do instead is move parallel to it.

You can take into consideration popular guidelines such as the rule of thirds, leading lines, space balance but do NOT be afraid to break them if you need to.

Always be on the lookout for new and innovative opportunities.

Polarizing filters can act as superb tools to help you with the job. Since rainbows are just created out of refracted light, polarizing filters can use their power to enhance their color and texture even better. But be advised though it can just as well lead to the complete opposite. Yes, it can make the rainbow completely invisible to your camera if you do not use it right.

There you have the perfect recipe to follow to get the most beautiful images of the Indradhanush (rainbow in Hindi). It is just limited by your imagination now.

So the next time it rains, be prepared. Get out, look for the signs I asked you to look for and lie in anticipation of one of the most heavenly things ever. Just be quick though. They don’t last long remember? Tick tock!

Let me know how it went. I would love to hear about your experience.