The ‘rule of 500’ or the ‘500 rule’ is a simple guideline which helps calculate an approximate duration of time for image exposure for a certain type of night time star photography.

The first thing that I want to point out here is that it is an approximate value. In NO way, shape or form is the value absolute or the most optimum.

The simple idea behind using this “rule” is to get the photographer quickly to a ballpark number after which a little adjustment should get him to the best possible shutter speed.

We are here to discuss the second form of star photography, static stars. Focusing primarily on exposure duration.

All we want is for image to be well exposed (not too dark) but at the same time without streaks. It is easier said than done.

Photographs are nothing but a simple recording of light.

Like all other images, star photographs also require a certain amount of light to build the image. Failing which the final photo looks dark, almost like a black screen.

You have your regular three channels Aperture, ISO and Shutter speed to let in light into the camera but there are limitations.

Depending on the lens you use, there will be an aperture beyond which the lens is unable to open up further (largest aperture size).

You could try bumping up the ISO to allow the sensor to be more reactive to light. But since most of what you will shoot anyways is dark and black, it is not recommended. The last thing you need is an image with a ton of noise in it.

Ah, the shutter speed. Now, this has no such cap on it. You could use it as much as you want with absolute impunity. But since we want to capture the stars minus the movement they have, we need to do what we usually do for dynamic subjects. Use a faster shutter speed.

Yes, the stars are really slow to move but they are moving nevertheless. In order to avoid accidentally capturing the motion, we need to set a limit on the shutter speed too.

The 500 rule helps us with just this.

The basic formula is as follows:

Maximum shutter speed to be used (in seconds) = 500 / Effective focal length of the camera.

Say you have a full frame camera and a 50mm lens combo to shoot the stars. So according to the 500 rule, the maximum shutter speed that you can use to help prevent the stars from trailing is calculated as follows:

So as long as you limit your exposure to 10 seconds or less, your image should have no trails in them.

Now just to point out a simple thing that you shouldn’t miss here.

Notice carefully that I mention ‘effective focal length of the camera’ and not just the focal length. This means that you also need to factor in the type and size of image sensor you have in your camera.

Let me make this easy for you.

All you have to do is figure out the type of sensor your camera has and then just perform one extra step to calculate your camera’s effective focal length first.

Here are the magnification ratios of some popular brands:

Now you can use these values in the rule of 500 to finally get to the max shutter speed.

Say if you have a micro four-thirds camera and if you use a 50mm lens, the max shutter speed would be,

So as you can see, the sensor size also plays a part in the equation.

Larger the size of the sensor you have in your camera, longer you can shoot.

Just have a look at the example above. By only changing the sensor size, we have effectively halved the max shutter speed we can use. From 10 seconds earlier (full frame camera) to just 5 seconds (micro four thirds camera).

For the rest of this post, I will assume we are using a full frame camera just to keep it consistent and to make it easy to understand.

The duration for which the camera sensor needs to be exposed to create a “well-exposed” image without letting the stars streak depends on a lot of small nuanced decision than the gross approximation of the 500 rule. 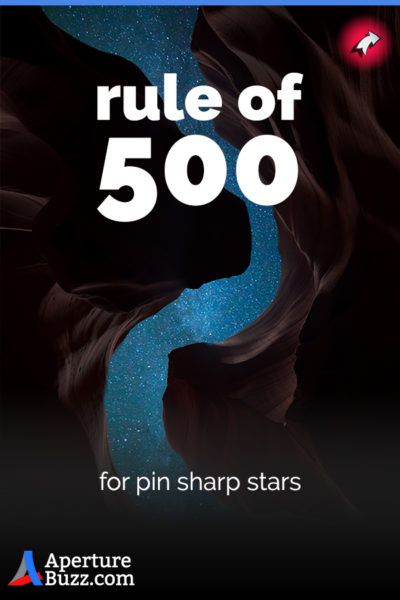 One thing that you should understand here very clearly is that the occurrence of the streaking pattern of the stars depends very heavily on the movement of the earth relative to the stars. Faster the movement, longer the streaks would be.

In this respect, it is just like any other fast-moving subject. Faster the subject, faster the shutter speed needs to be, to be able to take a sharp picture.

Now each star travels 360 degrees within the span of 24hours. That is roughly 0.25 degrees per minute.

Due rotation of the earth around its fixed axis, the stars near the poles seem to move the least and the those near the equator travel the most. And not just that. There are many more factors which all together determine the time period you can set your shutter for before the star in the images elongate.

The focal length of the lens used, sensor size, the position of the star relative to the earth, your position on earth, image resolution, viewing distance of the final printed image, the angular speed of the star…the list is endless.

The reason why the rule of 500 is so popular is because it cuts through all these astronomy induced hurdles and gets you in close vicinity of the actual number, fast! The idea is not to be precise and accurate at all. It is just being as fast and efficient as possible.

Many photographers use very similar, sister versions of the rule of 500 to gauge the shutter speed they need. The rule of 400, the 600 rule, the NPF rule is just to name a few.

Since none of them is based on rigid scientific facts or any mathematical expression, you cannot negate any of them. Whatever works for you is the one you go with.

There are many mobile applications nowadays which can calculate the exposure duration for you. Just search the app stores and you can come up with loads of them.

Here is a handy calculator that you can use right now:

Have a great time shooting the sparkling beauties of the night skies, guys. And if you get something good, please do share it with me. I will be very happy to see it.

You say “Since none of them is based on rigid scientific facts or any mathematical expression,” It is not true for the NPF rule.

See here the maths behind this rule…
https://www.sahavre.fr/tutoriels/astrophoto/34-regle-npf-temps-de-pose-pour-eviter-le-file-d-etoiles

Thats in french but you can let Google translate it.

Hey Fred, thank you for the link. What I meant by the sentence is that there is no one rule (among 400,500,600 or NPF) that would fit all the situations equally well. And also that like many things in photography, this too is more discretionary in nature than being purely deterministic.